BOOM! Kitchen micro-update post to hold you over until I actually put together a real one with actual kitchen units and stuff…

Sooooo, in my last kitchen post I thrilled you with several hundred words about painting a wall white. Now I get to actually share some comparatively interesting updates on boxes containing actual cupboards and kitchen things.

When I ordered my kitchen from IKEA I watched their calm videos about how easy it is to install and proudly told everyone about how I was going to do it myself. Me, who owns about three DIY tools and, whilst being averagely good at assembling flat-pack furniture, had never done anything more than that.

To their credit, everyone I casually mentioned this plan to smiled very sweetly and nodded at me without laughing in my face. Bless them and their inner giggles at my ridiculous plan.

IN MY DEFENCE if my walls and floor had been level I still maintain that I could have done it myself a la the oddly soothing IKEA videos.

Once the old kitchen units were out of the way it was clear that my walls, floor and newly revealed pipework was not quite the crisp white box IKEA’s video used with their nice 90 degree corners and walls that didn’t have three different angles from one side to the other.

I called in my plumber’s dad who happens to be a carpenter to install everything which turned out to be a very wise move. Given how fiddly he found it (and he knows what he is doing!) there is no way I could have done it to that standard without having some sort of meltdown and deciding that YOU KNOW WHAT I’LL JUST HAVE ONE CABINET THAT IS HALF ATTACHED TO THE WALL AT AN ODD ANGLE AND THAT’S HOW I WANTED IT AND SHUT UP I HATE YOU.

I have to say I was surprised at how many bits my kitchen arrived in (and that the two lovely delivery men had to carry up the two flights of stairs to my flat!). It came in about 120 pieces which we really really really enjoyed living around for weeks while I got the installation booked in (sentence may contain sarcasm). This picture shows just some of the boxes… 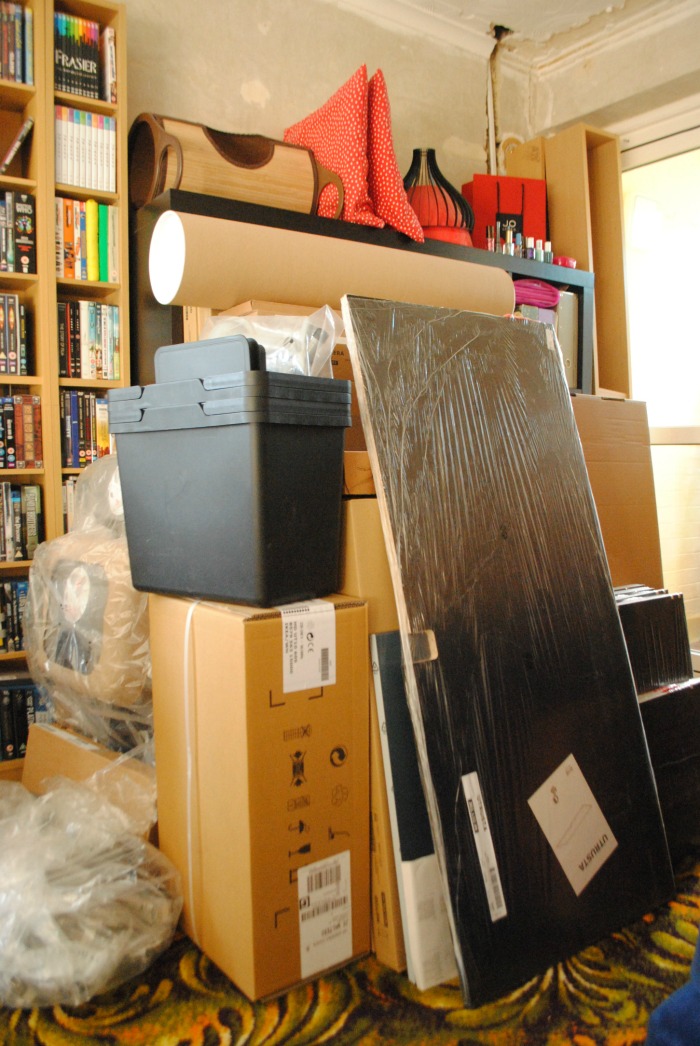 Ever the fan of organising while Rome burns I did enjoy labelling up the boxes and cross-referencing things against my order sheet. Very satisfying.

I promise to write something with actual progress in it soon rather than another few hundred words of almost-kitchen.

In the meantime I’m off to Delft, home of IKEA HQ (and where all the houses seem to have flat walls grrr!)