In fact it was over a month ago but I’ve been super busy at work or sleeping since then so let’s just pretend it has only just finished.

Just to recap, the ceilings in my flat were ugly, wonky suspended ceilings. We discovered this when the flat was being rewired (though the ‘ugly’ was obvious from the start!) so it was an unexpected project/expense/hassle (always the best kind).

This montage shows just some of the ceiling tile designs (the bottom right is from the toilet/bathroom and I had to whack the light on to truly capture its beauty hence the yellow tone, they were white too in real life). There was a different design in each room but my favourite is the one on the left which was in the hall. 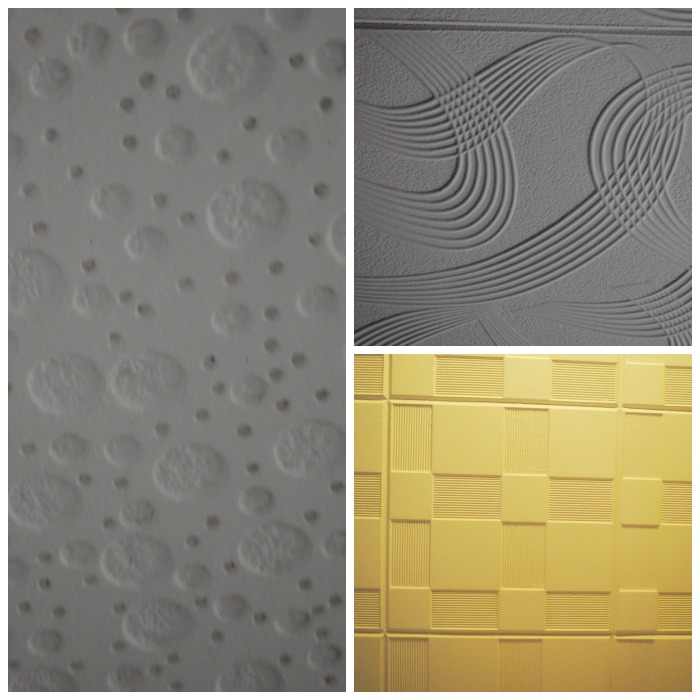 The work to rewire the flat meant there were random holes in the ceiling and this particularly big patch in the lounge where they’d taken off more tiles to investigate. You can see where someone had put in three layers of tiles to try to level it out. Excuse the atrocious photography but I was dashing round snapping these on the morning the builder was due to arrive and I am *not* a morning person! 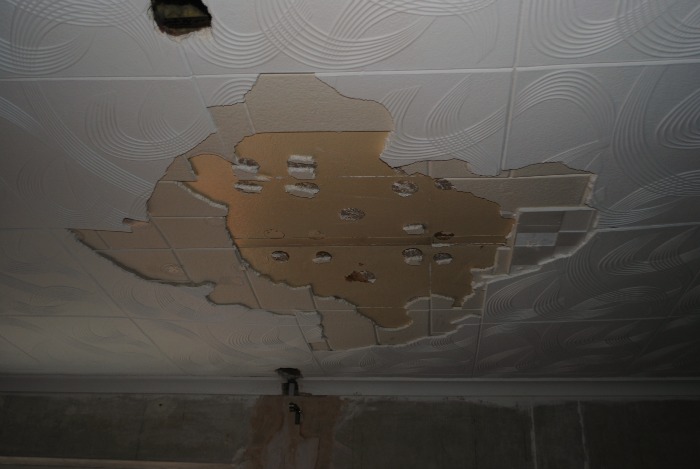 The plan was to add joists between the tops of the walls then plasterboard and plaster them. This would give me a loft space that was usable (helpful a few weeks after the work was done when someone needed to come and inspect another leak in the roof!) and ceilings that were like normal person ceilings.

I had a quote to replace the ceiling with a modern suspended ceiling system but for not a huge amount more money I could have grown up actual person ceilings so went with that option.

The work was pretty disruptive. With my rose-tinted glasses on it wasn’t that bad but at the time felt a lot more annoying.

Work happened in two phases: remove the ceilings in the lounge, hall, toilet and bathroom, put in joists, plasterboard and plaster them then repeat for the kitchen and bedrooms.

Initially the builder said ‘so you’ll be moving out with all your stuff right?’ and there was that awkward moment where it became apparent that was not going to be my plan so I just smiled very sweetly and hoped that wouldn’t jack up the price.

In the end, we moved everything out of the lounge into the office and sunroom for the first phase of the work. The boyfriend and the cats went to house and cat-sit elsewhere so it was only me squeezed into the bedroom once again not knowing where most of my belongings where.

The work itself was relatively fast and less dirty than I thought it might be.

It was amazing to come home on the first day to no ceilings! All of a sudden I had vaulted ceilings (albeit very ugly and covered in spiders webs) and could see the inside of the roof. It was kind of cool and kind of creepy. 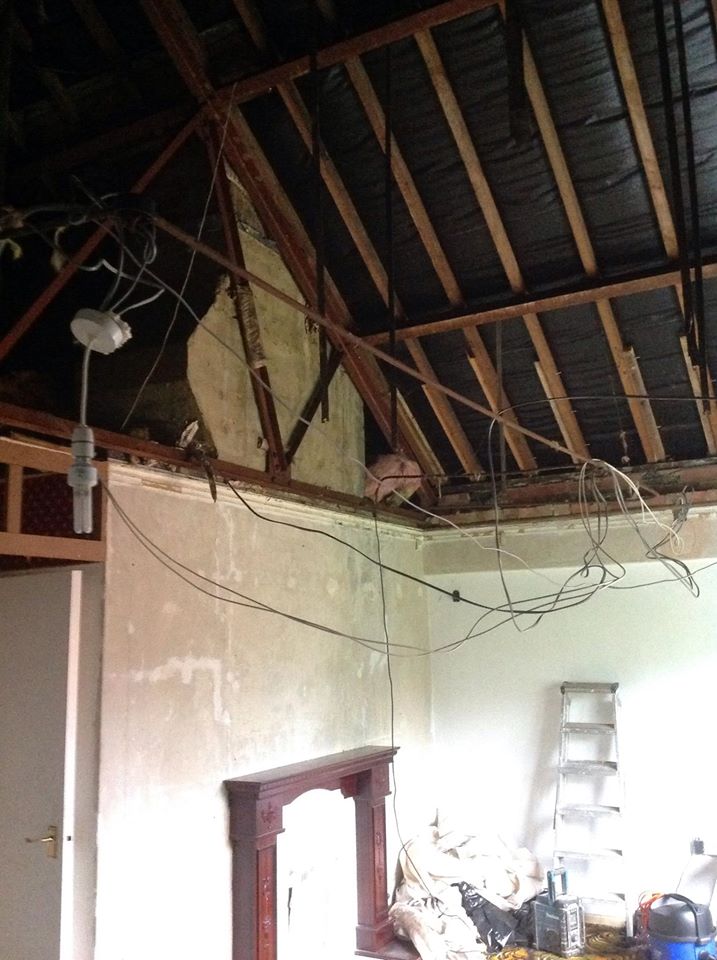 I put some pictures on Facebook and lots of people said I should get the ceilings properly vaulted. I had that ‘oh god should I have done that instead? Is it too late? What shall I do?’ moment. Luckily (?) the builder said actually doing that would require loads of complicated (and expensive!) work so yeah the vaulted look didn’t stay. 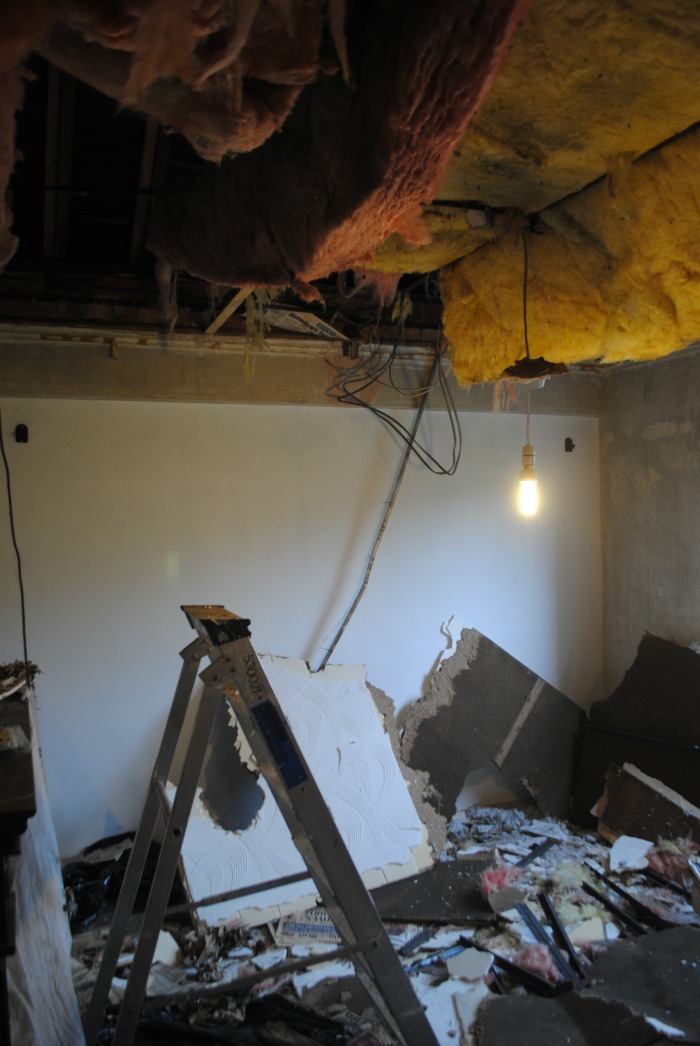 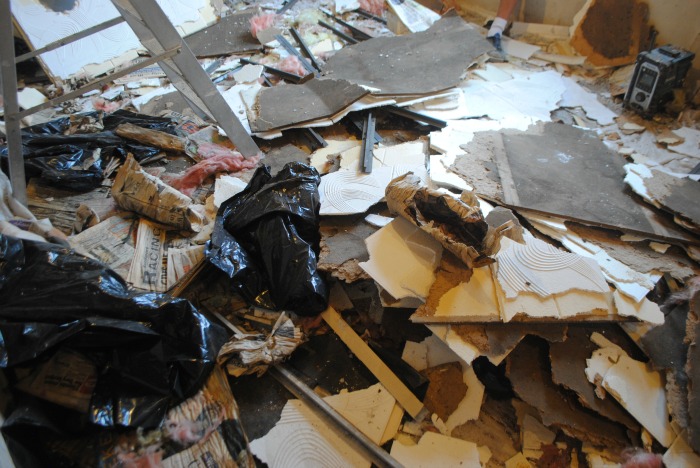 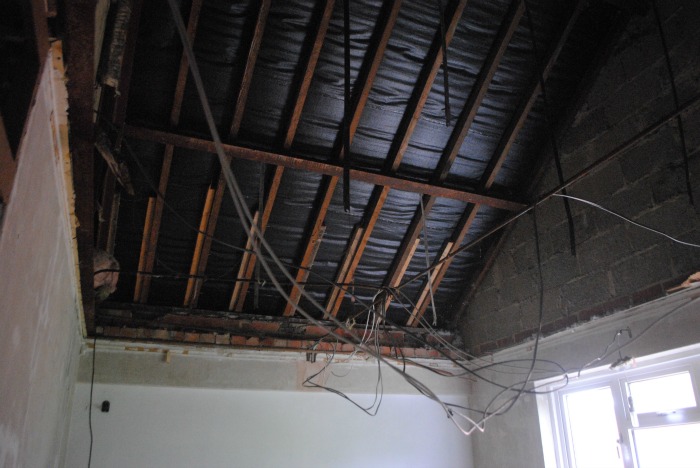 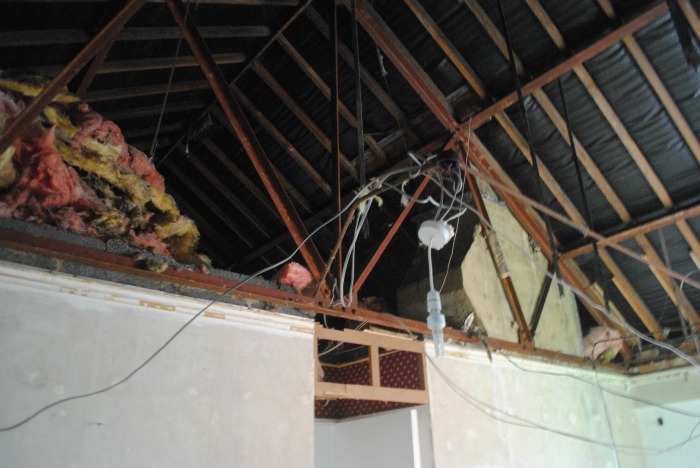 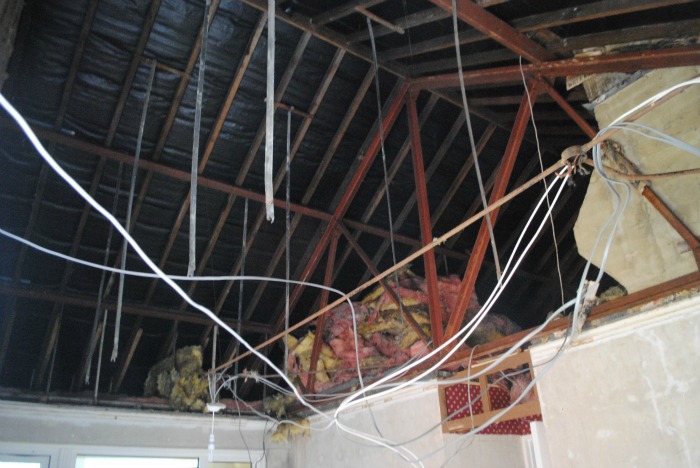 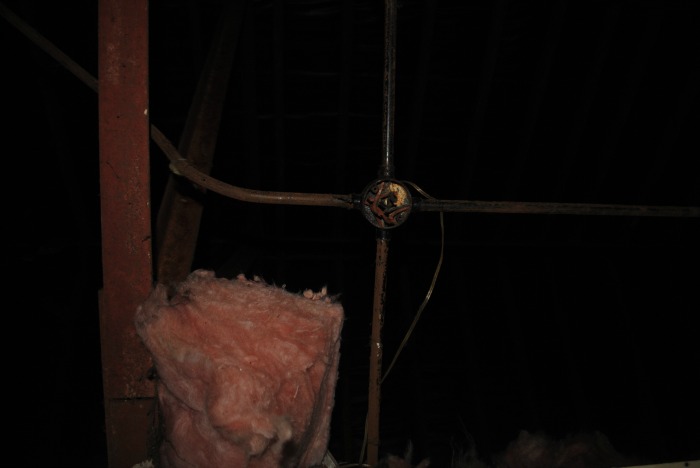 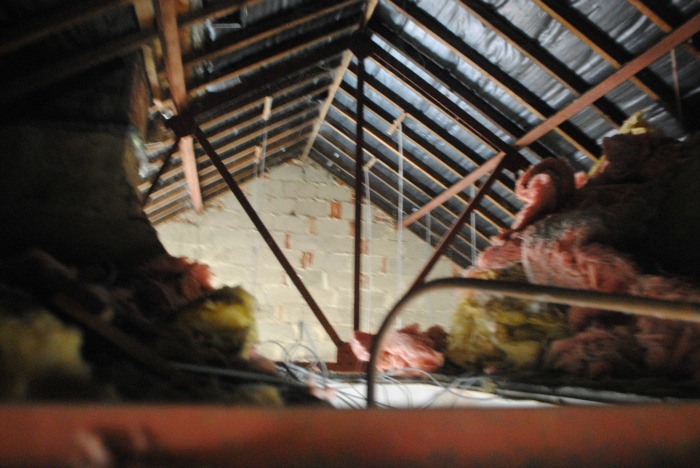 Over the next few days joists were added on joist hangers attached to the tops of the walls then eventually plasterboard went up (in a delightful shade of pink!). The work was grimey (think of all the dust and who knows what that was lurking in the loft space) but the builders were super tidy as they went (like, the carpets were actually cleaner than before they started) and it definitely wasn’t the dustiest work I’ve had done so far. 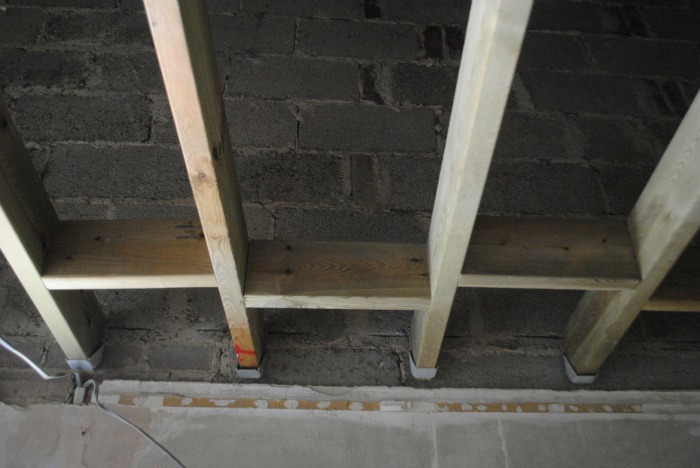 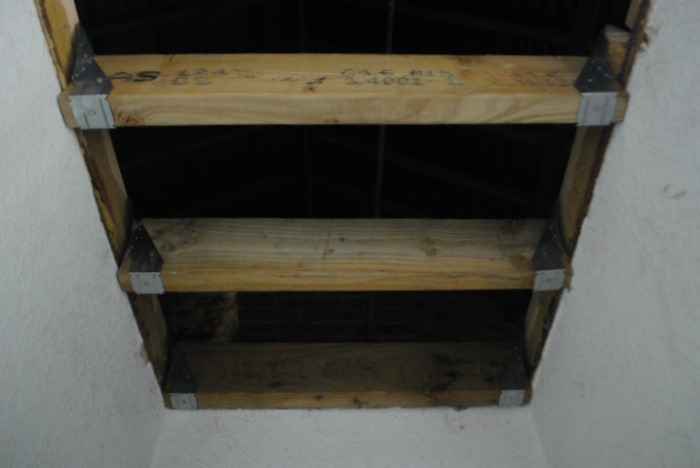 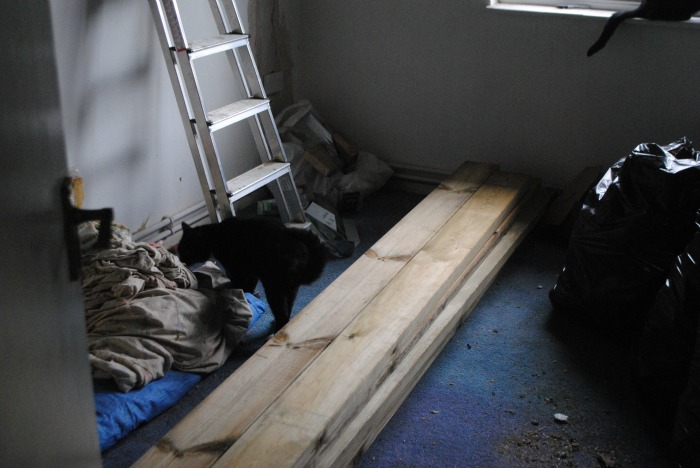 The plastering was magical and I think I freaked the plasterers out by suddenly appearing in doorways staring up at the ceilings and whittering on about having real person ceilings (apparently that is not a common building description).

Once the first phase of work was done we had to squeeze everything into the lounge so they could do the bedrooms and kitchen. In a way, a room with a bed, sofa and tv and no particular point in being very tidy is my dream living arrangement so this wasn’t too bad but having to climb across a piece of furniture to get something or somewhere got old quite quickly! 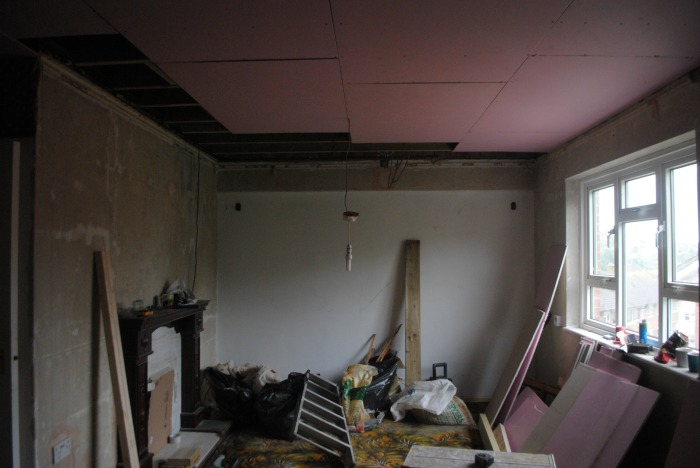 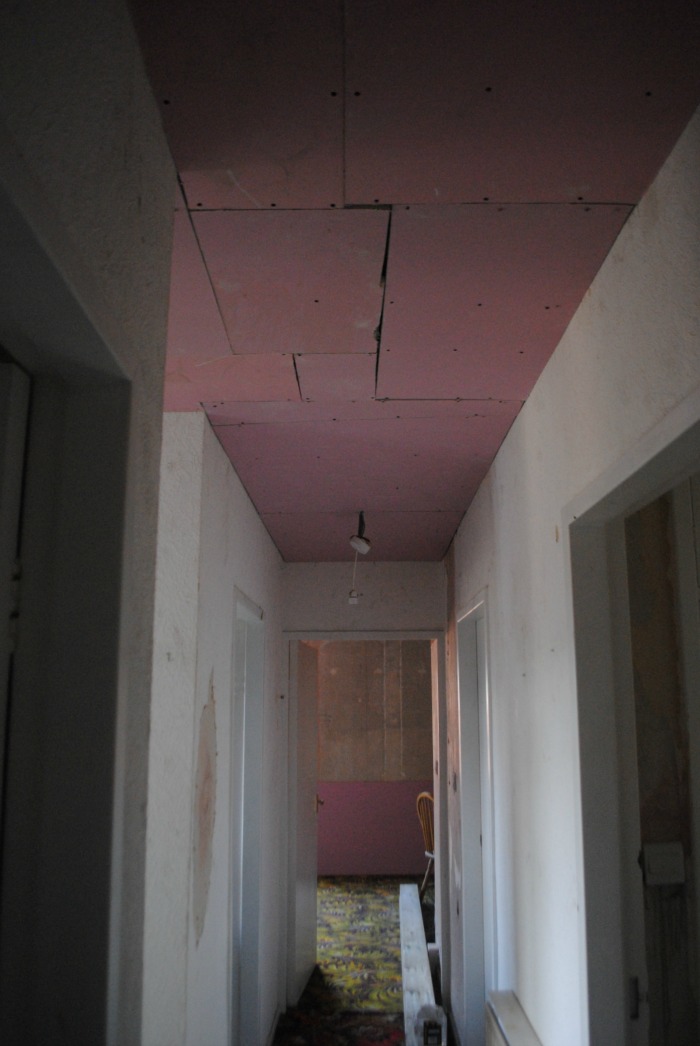 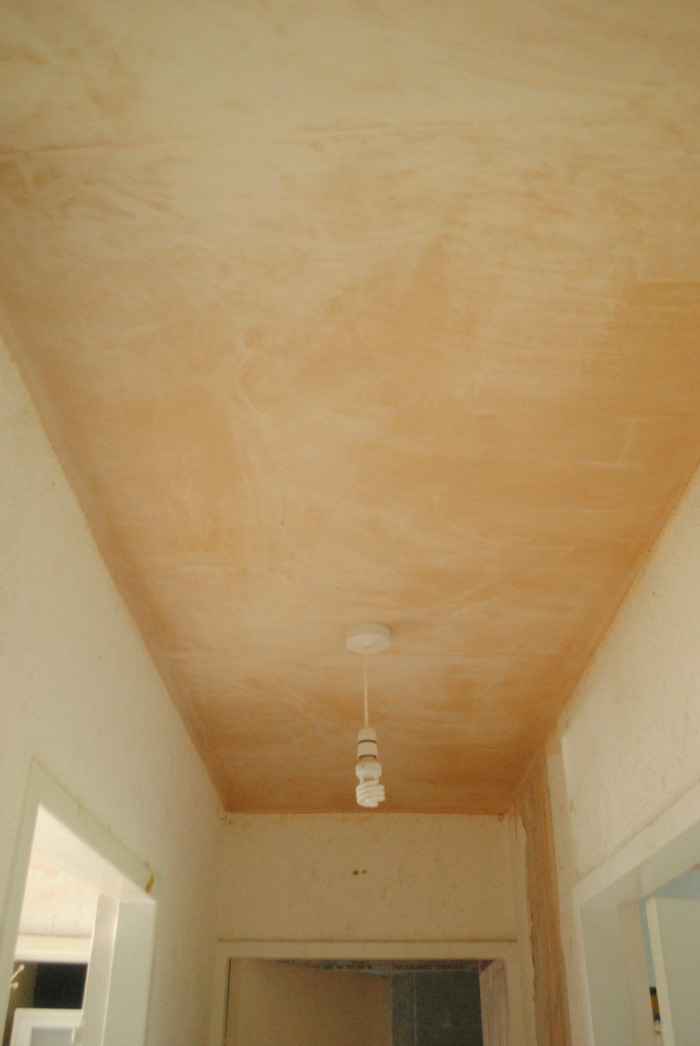 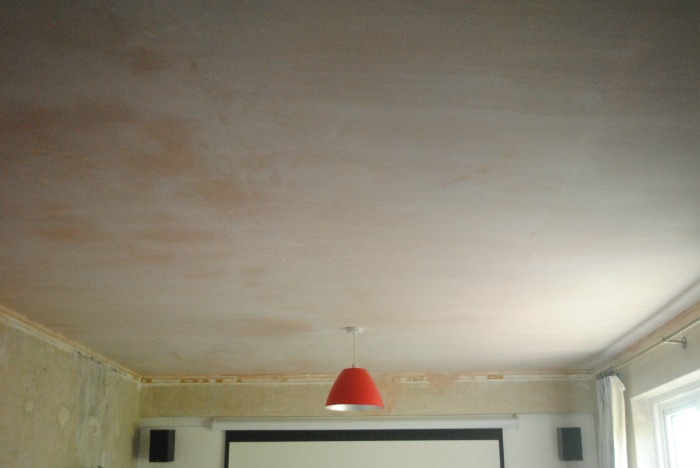 The final step now is to paint them. Despite my initial enthusiasm about the prospect I soon realised I’d just whinge far too much to make that a satisfying project (story of my DIY life). My grandparents came to visit and very kindly offered to pay for someone else to paint the ceilings so woohoo I don’t have to do it! I’m booking that in now so they should be glisteningly white very soon!

I’ve got the week off work so in theory I’m getting lots of little jobs done. In practice I’m mostly napping and watching telly so yeah don’t hold your breath for a flurry of new posts!